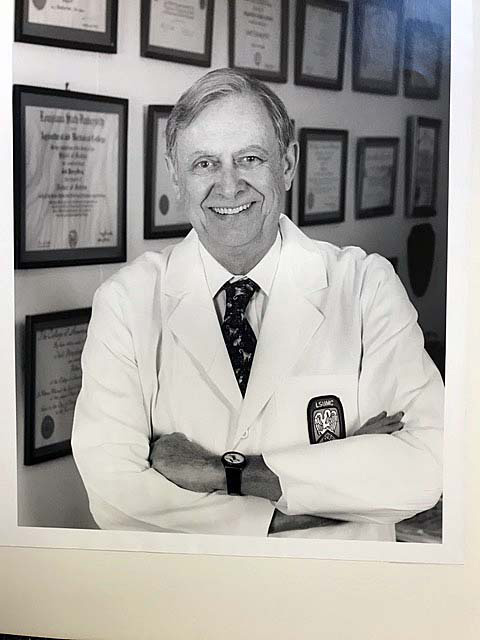 
Dr. Strong was born on April 27, 1928 in Birmingham, Alabama. He earned his bachelor of science degree in 1948 from The University of Alabama in Birmingham, with Phi Beta Kappa honors, where he was also a member of Sigma Chi fraternity. He received his doctor of medicine degree from LSU School of Medicine in 1951, with Alpha Omega Alpha honors. He joined the faculty of LSU Medical Center in 1955 as an instructor of pathology, became assistant professor in 1957, associate professor in 1960, full professor in 1964, and became head of the department in 1966 until 2010.  He retired in 2013 at the age of 83.


Dr. Strong was an Internationally known pathologist, and the world’s first person to conclusively document the relationship of smoking to atherosclerosis.

He was the first Boyd Professor for LSU Health and Sciences Center, which is the highest professorial rank within the LSU University System, awarded to faculty scholar-researchers who have attained singular international recognition in their academic disciplines. LSU established The Jack Perry Strong, M.D. Endowed Chair of Pathology in 1992.  His work has influenced countless medical students, residents and graduate students.


He was a Director of Laboratories at LSU Medical Center Health Care Services Division since 1998, and Director of Pathology Department at Charity Hospital in New Orleans from 1975 until his retirement.


His primary area of research was Cardiovascular Pathology with particular interest in atherosclerosis. He established The Cardiovascular Center of Excellence in 1991 on the strength of the Pathobiological Determinants of Atherosclerosis in Youth (PDAY) National Institute of Health grant, to study the natural history and risk factors for early human atherosclerosis and development of cardiovascular disease. He was the principal investigator of the PDAY Study which is the longest running and most comprehensive source of information in the US about how early heart disease begins in youth and how it progresses.


He received the Order of the Rising Sun, Gold Rays with Neck Ribbon, from the Emperor of Japan for his research and collaboration with Pathologists in Japan in 2008.


He was one of the original founders and most enthusiastic supporter of the Japanese Garden of New Orleans, located inside the Botanical Gardens at City Park of New Orleans.


Jack was an avid world traveler, enthusiastic gardener and a family celebrated gourmet cook. He had a quick wit and an infectious sense of humor. He loved life and enjoyed spending time with his family, and adored his grandchildren and great grandchildren.


He is also survived by his sister-in-law Bennie Buzbee of Baton Rouge and nephews Donnie Buzbee (Marie) and Kenny Buzbee (Jennifer), as well as his brother-in-law Gene Lewis of Birmingham, Alabama and nieces Ann Upshaw (Jeff) and Carollee Followill (Dick), and nephew Buddy Lewis (Martha).


A private Methodist service for the family was held at Lake Lawn Metairie Funeral Home.


A Celebration of Life honoring Dr. Jack Strong will be held for all friends, colleagues, and family on November 16th, 12 - 3pm, at The Pavilion of Two Sisters in City Park Botanical Gardens.


In lieu of flowers, the family would appreciate memorial gifts be made to The Japanese Garden Foundation of New Orleans-566 Emerald Street, New Orleans, LA  70124 or through jgfneworleans.org.

copyright(c) The Japanese Division of the International Academy of Pathology